1. Markets tend to return to the mean over time
By “return to the mean,” Farrell reminds investors that when stocks go too far in one direction, they tend to come back to their long-term trend. Overly euphoric or pessimistic markets cloud people’s estimation and judgment of what they can reasonably expect.

2. Excesses in one direction will lead to an opposite excess in the other direction
Markets in a bubble can seem ready to pop, yet they manage to stretch into unrecognizable shapes — and still find buyers. Think of Internet shares a decade ago or real estate before the housing crash. When the bubble bursts, watch out.

Conversely, markets in free-fall typically spring back as if tied to a bungee cord. Think about the sharp bounce U.S. stocks have had since March 2009, when the Standard & Poor’s 500-stock index SPX, +0.01% was about 80% cheaper.

The market’s recent volatility and investors’ uncertainty suggests that stocks are moving into another downswing. “Because we went so much higher [in the rally from March 2009 through April 2011], don’t be surprised if the correction is a little bigger,” said Barry Ritholtz, an investment manager and chief executive of FusionIQ, a quantitative research firm.Read more: 5 money moves one quant trader is making now.

3. There are no new eras — excesses are never permanent
This relates to rules No. 1 and No. 2. Many investors latch on to the latest hot sector, and soon a fever builds that “this time it’s different.” It never is, of course. When the sector cools, individual shareholders are usually the last to know and sell at lower prices.

4. Exponential rapidly rising or falling markets usually go further than you think, but they do not correct by going sideways
This is Farrell’s way of saying that a popular sector can stay hot for a long while, but will fall hard when a correction inevitably occurs.

5. The public buys the most at the top and the least at the bottom
The time to buy stocks is when others are fearful and sell when others are complacent. Accordingly, many market technicians use sentiment indicators to gauge investor pessimism or optimism, then recommend that investors do the opposite.

6. Fear and greed are stronger than long-term resolve
Investors can be their own worst enemy, particularly when emotions take hold.

To counter fear and greed, practice self-control. In down markets, keep enough cash on hand so you’re not tempted to sell at fire-sale prices and instead can buy on the cheap. In headier times, prune winners to the range you set for your portfolio’s asset allocation and use the proceeds to buy laggards. This strategy will help you to be proactive instead of reactive.

7. Markets are strongest when they are broad and weakest when they narrow to a handful of blue-chip names
There’s strength in numbers, and broad, powerful market momentum is hard to stop, Farrell observes. Conversely, when money channels into a shallow stream, many attractive companies are overlooked as investors crowd one side of the boat.

That’s what happened with the “Nifty 50” stocks of the early 1970s, when much of the market’s gains came from the 50 biggest U.S. companies. As their price-to-earnings ratios climbed to unsustainable levels, these “one-decision” stocks eventually capsized.

8. Bear markets have three stages — sharp down, reflexive rebound and a drawn-out fundamental downtrend
During the week of August 8, U.S. market volatility reached a level not seen since November 1929. Over four consecutive days of trading the S&P 500 moved at least 4% each day — down 6.7%, up 4.7%, down 4.4% and up 4.6% — finishing the week off 1.7%.Read more: Be an investor or a trader, but not both.

Is this the awakening of a bear market? With Tuesday’s close, the S&P 500 is down 12.5% since its April 29 peak. Not the 20%-plus decline that typically marks a bear, but still a confidence-slashing encounter.

9. When all the experts and forecasts agree — something else is going to happen
Going against the herd as Farrell repeatedly suggests can be quite profitable, especially for patient buyers who can raise cash in frothy markets and reinvest it when sentiment is darkest.

10. Bull markets are more fun than bear markets
No kidding.

„For the first time in history, retail investors’ index fund holdings exceed their holdings in actively-managed funds, according to new numbers from Morningstar Direct.

As of March 31, Morningstar says, retail investors had $8.53 trillion invested in index mutual funds, while $8.34 trillion worth of assets were invested in actively-managed funds.“

Co noted that since it issued guidance on April 21, 2022, the macroeconomic environment has deteriorated further and faster than anticipated.
As a result, the company believes it is likely that it will report revenue and adjusted EBITDA below the low end of its Q2 guidance range.
Co's Q2 revenue guidance on April 21 was growth of +20-25% yr/yr, or about $1.18-1.23 bln vs. $1.26 bln S&P Capital IQ Consensus.
Adjusted EBITDA expected to be between breakeven and $50 mln.
Trading: ,,in the stock markets, timing is everything,,
Investovanie: ,,Amatérski investori investujúci pasívne do indexového fondu budú mať v dlhodobom horizonte lepšie výnosy ako profesionálni manažéri hedge fondov,,. Warren Buffett.
Hore

Time to make some popcorn.

Berkshire Hathaway (BRKB) disclosed late Monday that it sold its remaining stake in Wells Fargo (WFC) during the first quarter, according to the conglomerate's latest filing of holdings with the Securities and Exchange Commission. Shares of Wells Fargo rallied with other bank stocks Tuesday, however.

you can't make this shit up.. WF je dead.
Hore 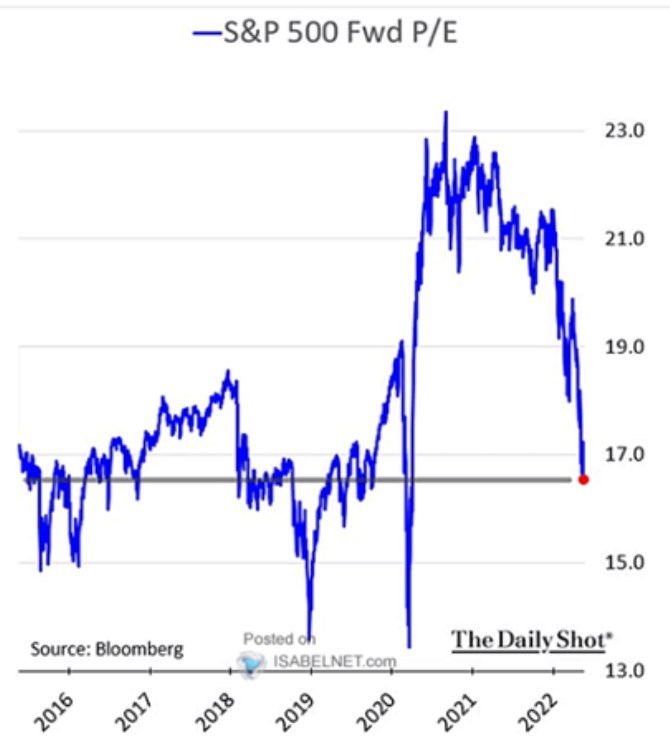 Estimates that almost a third of the GeForce Gaming GPU installed base is now on RTX, with strong demand in the Americas. Meanwhile, channel inventory has nearly normalized.
However, softness in parts of Europe started during the quarter related to the war in Ukraine and parts of China due to COVID lockdowns.
As a result, Gaming revs are projected to decline sequentially in Q2 (Jul).
The absence of sales to Russia is estimated to have a $100 mln impact on Data Center revs in Q2.
In Q1 (Apr), demand for Pro Visualization offerings remains strong as enterprises build out employees' remote office infrastructure to support hybrid work.
Revenue from hyperscale and cloud computing customers more than doubled yr/yr in the quarter, driven by robust demand for external and internal workloads.
Networking products are still supply constrained though improvement throughout the rest of the year is expected.
Trading: ,,in the stock markets, timing is everything,,
Investovanie: ,,Amatérski investori investujúci pasívne do indexového fondu budú mať v dlhodobom horizonte lepšie výnosy ako profesionálni manažéri hedge fondov,,. Warren Buffett.
Hore